I do not need my B9 to earn money, so I'm free to experiment with it and to use it to indulge other interests, namely designing hard and software.

Having a 1.1 and a1.2 machine that's two additional computers - it might be possible to do with just one, but I'm not that confident that this will work out well.
Those control computers can be very simple machines, but instead to look for some cheap netbook, I decided to go the full Monty and to create some "intelligent printer controller".
Each printer controller consist of an RaspberryPI, power supply and if desired a Wireless Dongle. The Hardware costs less than 60€ as a set. Taking an educated guess I'd expect the price in the US to be about 60$. 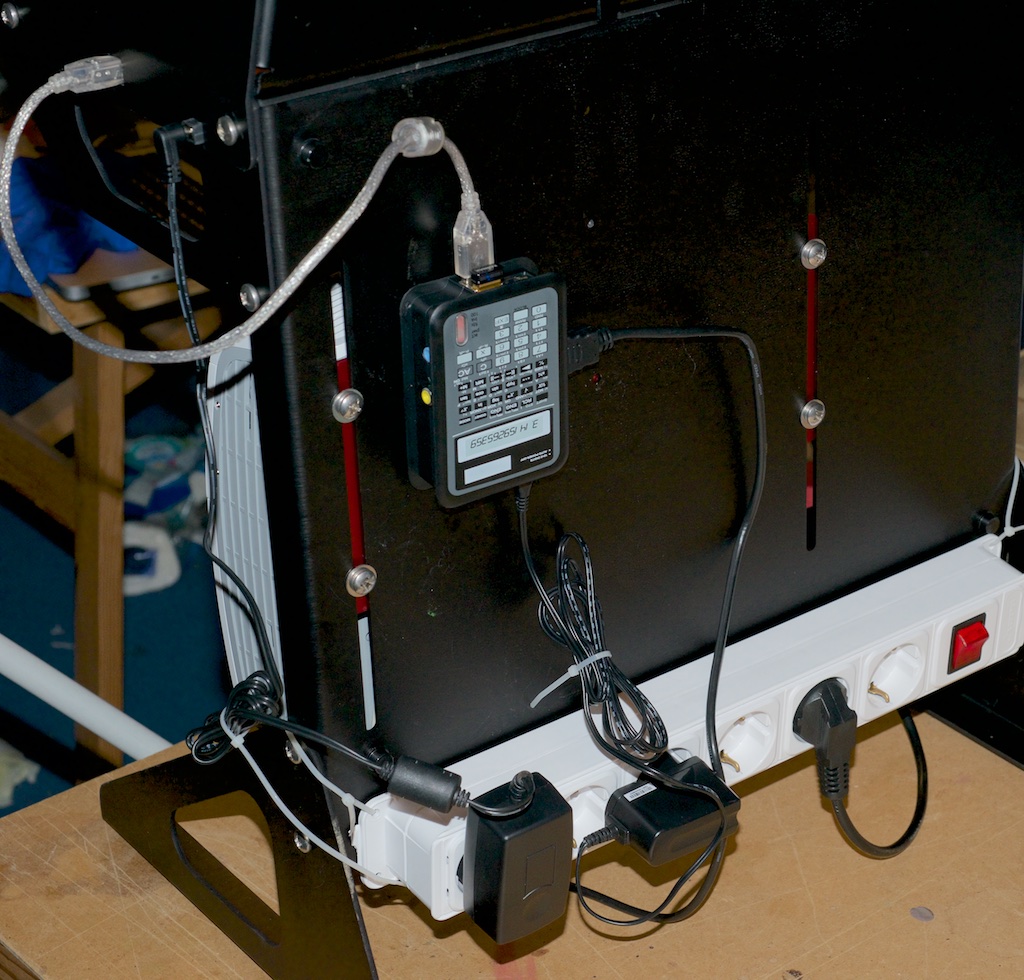 The Raspberry mounted at the back of the 1.2. The keyboard and display are only printed on the casing and have no function. When using a Wireless Dongle the "greater Printer" needs only power.

The Raspberry shows a split personality to the world.
A network drive, so you can copy files to it's storage - as this is a standard samba server, you can slice your model directly onto the Raspberry's drive.
It also puts up a webpage, which allows you to control the B9 from any "modern" browser.
The Raspberry supports all the printer, material and calibration commands you're used to from the B9 software.
All file formats including the Material library are compatible and so it the Factor Calculator.
There might be differences in the handling of the exposure regarding hotspot and slope - I can't check, because the sources are not longer available.

The Webpage can be accessed from everywhere, if you setup your network accordingly, you could even control it over the internet.
Multiple computers can access it simultaneously. So you can finish a task on the printer from one device, even if it was started on some other device. 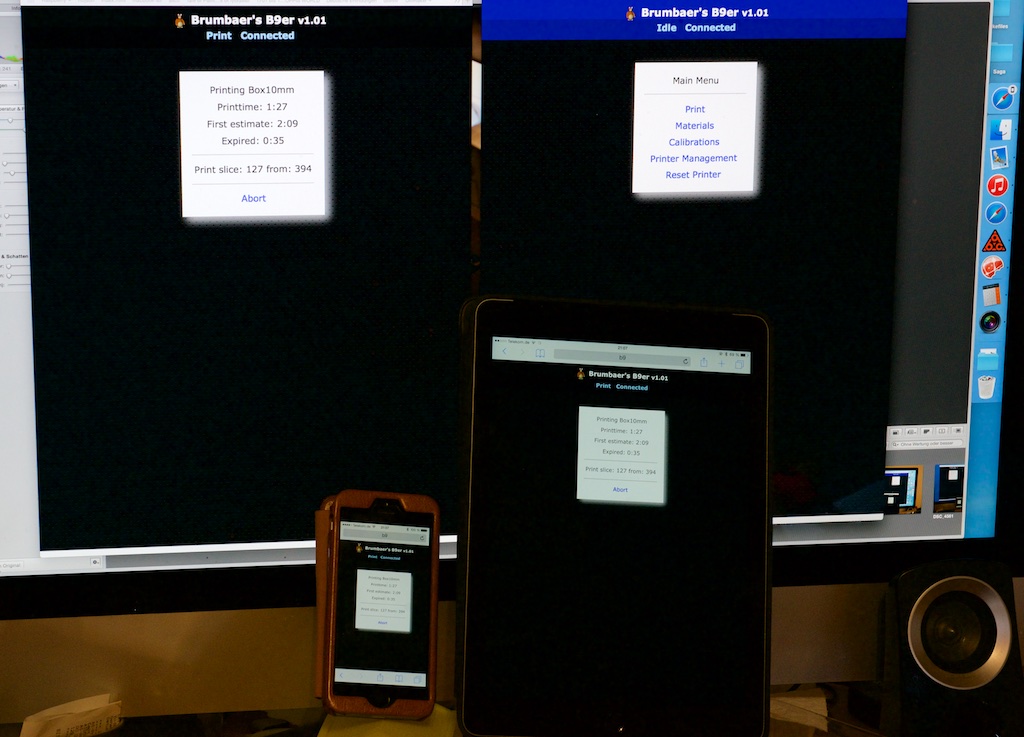 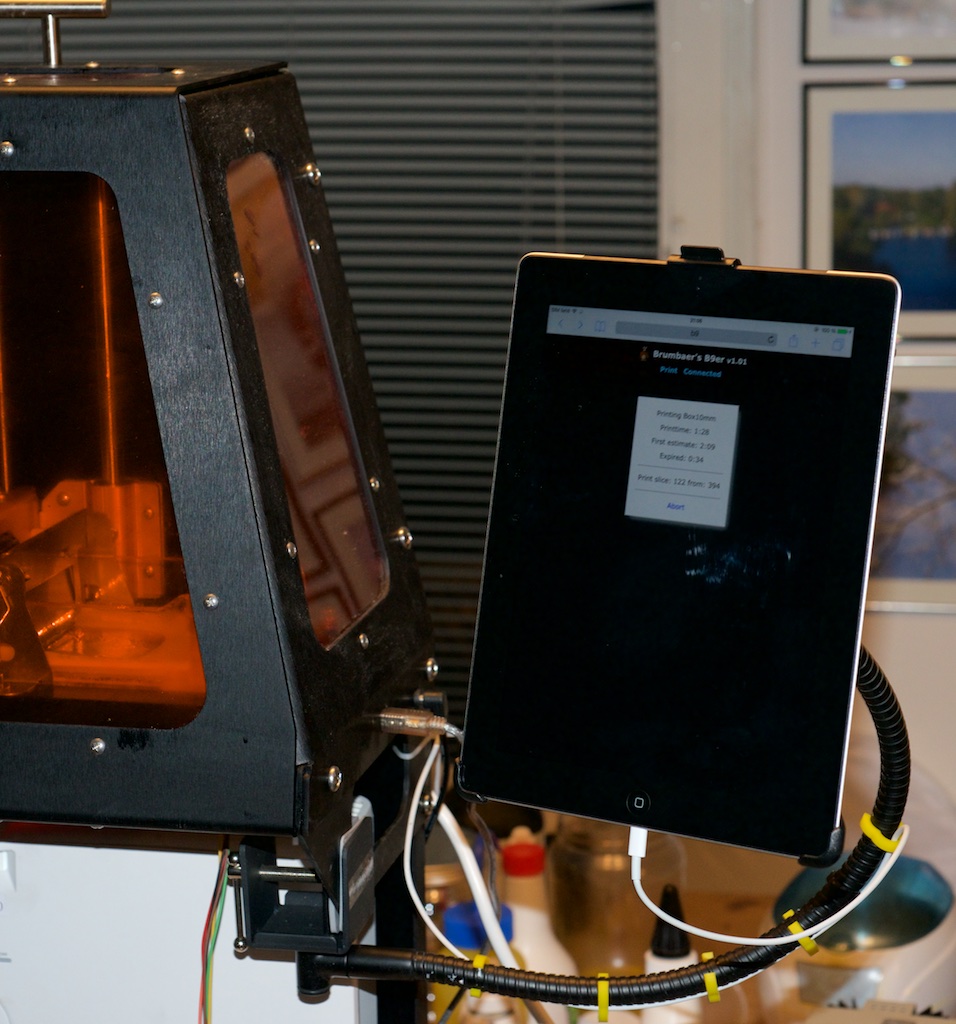 It's convenient to have a device for printer control at the printer. In this case I use an iPad mounted on a goose neck. The cable connection is the power supply. Of course, I could use my phone or an "mobile" iPad, but having the iPad mounted spares you to look for a save space to lay it down and keeps it out of harms way.
I use the iPad for both B9s - which are located to each other - I just have to tap to switch between them. I could write a browser that has a split window - there's an idea.

The hardware is an unmodified RaspberryPi B.
The software consists of an special application and some data files.

For using Wireless and the Samba Server, you will have to change some configuration files. I could do a setup script for that. Better would be to have a fully configured disk image, but I will have to check copyright issues for that.
Top

Hello Lino,
thank you for your interest.
I'll check on the copyright issues and if they work out, I prepare a "disk image" to be copied to a SD card.
Might take a day or two.
Top

Ok,
i added some routines to ease installation.
I wanted to create a disk image first, but this is just too large to be feasible. So I added install and update scripts or such. So that installation can be done relatively easily.

There is just one command missing. If you want to try it out mail me (email on the webpage, at the missing command).

If there is any interest I may add some more details.
Top

First is Falloff "Calibration"
It's something like Projector Calibration, but instead of size, it shows you where the software - hotspot is and what the software falloff looks like and allows you to change the values. 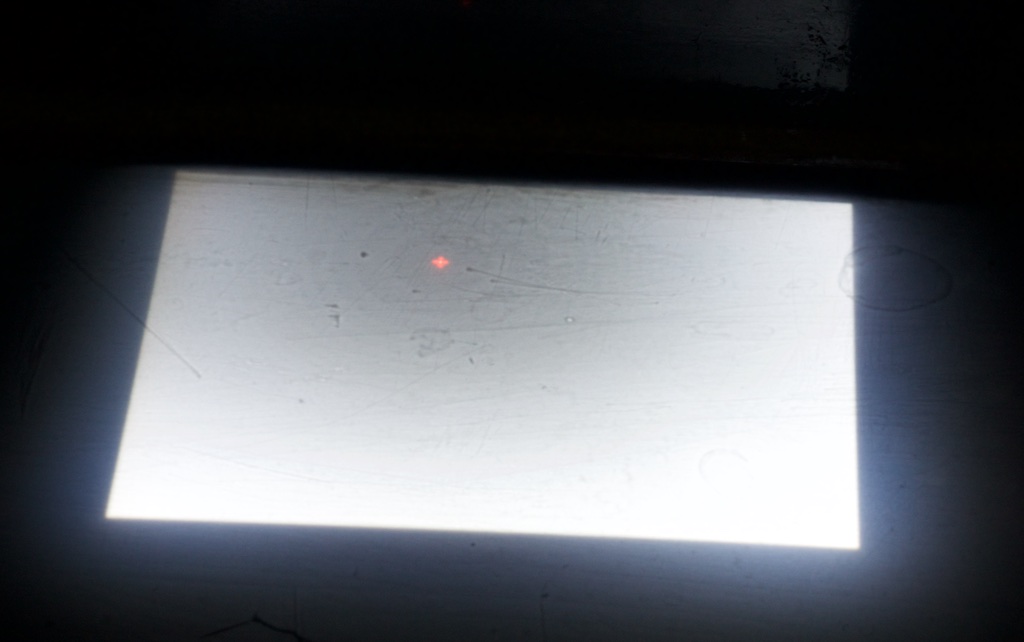 The hotspot is marked with a red cross. Brighter areas will be exposed longer. So the cross will always be in the darkest area.
When you change fade and balance the cross and the "dark area" will move accordingly, when you change slope the difference in brightness between darkest and brightest spot will change accordingly.
To make best use of it you have to put a paper or something else into the vat to project the image on. I use a piece of back-projection-foil.
When you set the Slope to 0 the paper the image will have the same output in all places. So you can use this setting to see where the "real" hotspot is and move the cross onto it.
Don't forget to set the value for slope back.
The ratio in brightness is the same as the ratio in exposure time. So in theory you could adjust the values, so that the light distribution of the projection is even and have the perfect calibration.
Reality is less perfect as the projection material absorbs light in a different way and you can't be sure that the distribution of uv light is equal to that of visible light. Also the image is not at full brightness because you couldn't look at it.
Time will tell how close to perfect you can get

It is useful anyway as it shows you what the parameters do.

The second addition is a Test Print. 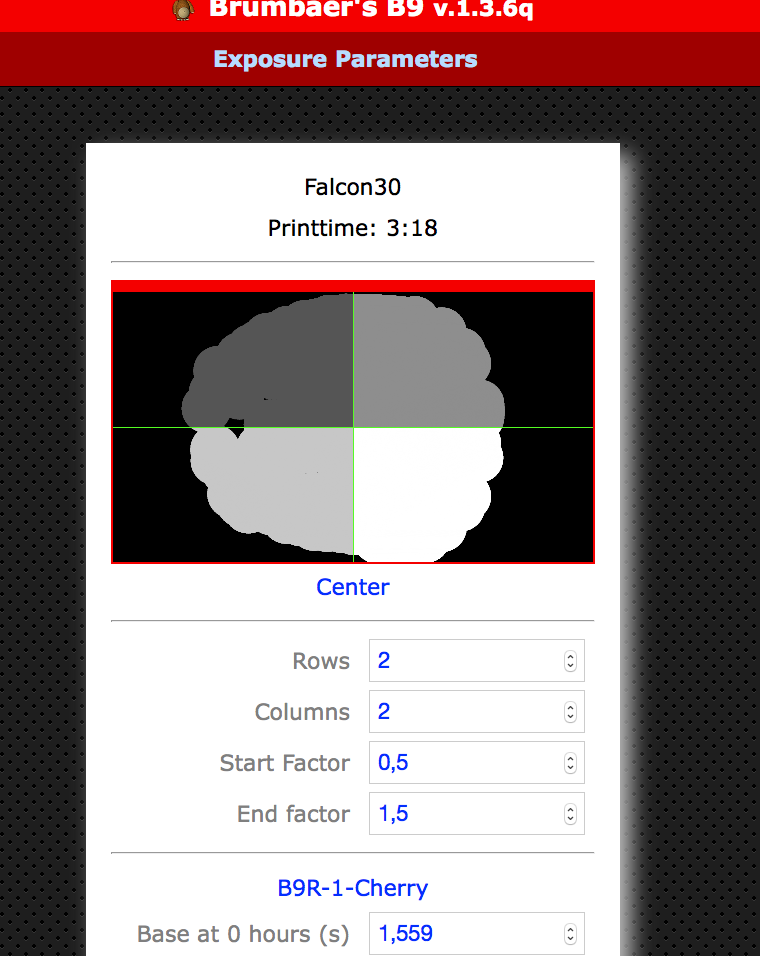 Basically it is just the ordinary print feature, with the print area divided in rows and columns.
Each tile is exposed with a different exposure time.
You define the standard exposure time as usual, but in addition you specify Start- and Endfactor.
The tile in the top left corner is exposed using the standard times multiplied with StartFactor. The tile in the bottom right corner is exposed using the standard times multiplied with EndFactor. The exposure times of the other tiles are spread equally in between.
Let's say you use 2 rows and 2 columns,
Base of 3s, Over of 1s, ABase of 12s and AOver of 4s.
Start of .5 and End of 1.5.

This is useful to find the correct exposure time for resins, because you just have to do one print to test different exposure times.
Of course the falloff calibration must be at least ok for that to work.
If you know which factor is the right one, you can adjust the values of your material or just copy the factor to MSM.

The image shows the tiles shaded with the relative strength of their factors and the division lines between tiles. You can move the slice around to align parts and tiles.
Top

This is very interesting.
Top

This really is interesting. The past couple days I was actually interested in asking a question whether I could use a windows tablet to run the machine with. Not only it will save me a space on my desk as I run with laptop, but it could be a nice style addition hanging next to the machine

any thoughts on this? It is a windows 8 64gb core i5? How about anything lower then i5?
Top

U don't need processing power to print. Do need video out and usb connection and screen resolution to match the version of B9 u are printing on and the ability to extend display. I'm using small ASUS notebook for printing on my 1.1.

You can run the original B9 software from any Windows (not Windows RT) PC as long as it has the ability to output 1920x1080 (for 1.2 machines) preferably as a second screen, a free USB port and a screen big enough to fit the windows on.

It doesn't matter in which form the PC comes i.e. desktop, laptop, tablet, netbook or whatever.
Top

A screen resolution of whateverx800 are the minimum to fit the windows. Some netbooks have/had less and you can't all buttons.
Top